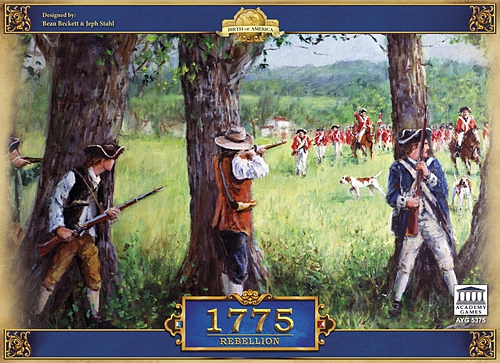 Successfully birth a revolution or quell the rebellion, in this strategy wargame for 2-4 players.

In 1775: Rebellion, players take the roles of the American Continental Army and Patriots against the British Army and it's Loyalists. Each side tries to control the colonies, provinces and territories. They call on the aid of Native Americans, as well as the German Hessians and French Army in order to successfully birth a revolution or quell the rebellion.

The four factions each use their own deck of cards to move their units into postions. Battle are resolved quickly with custom dice. If you can control an entire colony, province or territory you raise a flag. When the game ends with the signing of the Treaty of Paris, the side with the most flag markers is the winner.

1775 uses the same basic mechanisms as 1812: The Invasion of Canada, but to a different end result. The game is quicker (being 2-4 player) and the intermingling of units at the beginning of the game allows the action to start immediately. There are a few core rules that changed in order to better portray the goals of the war.

The game also comes with an advanced scenario, "The Siege of Quebec". We recommend this for players comfortable with the basic rules.

Learn more about 1775: Rebellion on boardgamegeek.com 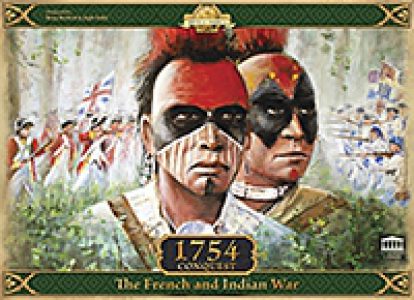 1754 - Conquest: The French and Indian War (quite minor box damage)