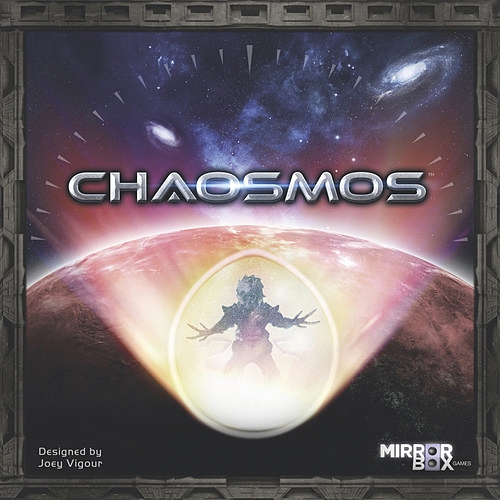 Chaosmos is a hidden information strategy board game in which 2-4 players compete to possess the Ovoid, a card of singular importance.

Chaosmos is a hidden information strategy board game in which 2-4 players compete to possess the Ovoid, a card of singular importance.

Chaosmos uses an open-world exploration system called "area-caching." There is no draw deck; all the cards are distributed amongst the players' hands and planet envelopes. Played cards go back to your hand after use except for single-use cards, which are discarded. The Chaos Clock counts down clockwise from 48 (36 for a shorter game), and each player's turn brings the Chaos Clock one step closer to zero.

Gameplay Basics: • Players have a 3 action turn which they use to move around a network of star-systems and 10 planets. • Each planet has a corresponding envelope that contains the equipment cards that are on that planet. • Players land on planets to exchange cards between the envelopes and their hand, as well as battle other players for cards and control of the envelopes. • Along the way, players decide which cards to collect or use, and which to leave behind on planets. • Players attempt to obtain the Ovoid card and protect it (with brute strength, misdirection, and special equipment) from their opponents. Like any other card, they can carry it or hide it on a planet. • Weapon cards have corresponding counter cards that reflect damage, so players must adapt to their opponent's strategies in order to maintain a long term advantage.

Playing effectively requires: • Choosing the right set of cards to carry, and adapting your hand over time as you gain new information • Reading your opponents' moves to figure out where they're leaving critical cards • Timing when to use your hypertokens to teleport for surprise attacks or to recover stashed equipment • Bluffing to prevent your enemies from discovering where the Ovoid is • Protecting the right planets with Traps, Vaults, or Bases, to prevent opponents from gaining access to them • Using other players' environmental toxicities against them to hide important cards • Combining cards tactically to amplify their impact

Learn more about Chaosmos on boardgamegeek.com