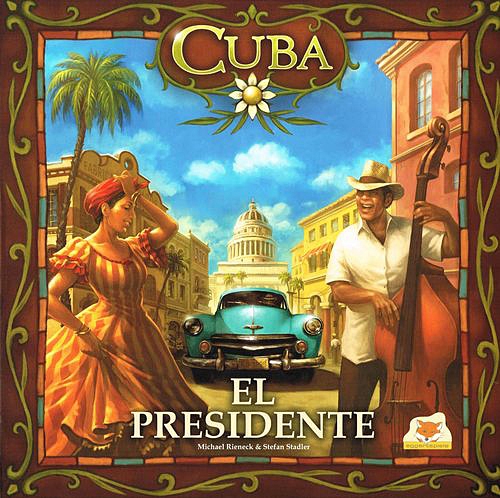 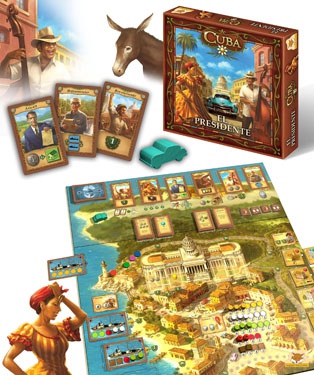 This expansion adds a MULTITUDE of improvements and new features to the "Cuba" board game.

IMPORTANT NOTE: THIS EXPANSION REQUIRES THE CUBA BOARDGAME. IT IS NOT A STAND-ALONE PRODUCT.

The expansion to be used by 'Cuba'. An additional game board, more and different ship cards, laws, buildings, new character cards to be used with the other characters, and a whole new phenomenon: Cuba - the Arrival of the President! In their turn, players may take and play a character from the 'El Presidente' board: the worker, dancer, attorney, warden, revolutionist or musician. They all have different effects. The worker acts as a warehouse; all your goods are safe this turn. The revolutionist gives you one victoy point, the musician two money. The player with the dancer card becomes start player. With the attorney a player may use a building even when his supervisor is not on the row or column of this building. The warden may change two adjacent ships in position. There is a mule card that is used when playing with less than four players; this card cannot be chosen. When all players have chosen a card, the car of the president moves to the position of the remaining card; remember, there are five cards that each turn are shuffled and randomly placed in the window of this board. Under each card on the board are symbols that come into effect when the car of the president stops here. The first makes all law proposals go into effect; the second makes it possible to move the supervisor anywhere on a player board. Or the next round makes it possible to pay one money and overbuild a building with another; the difference in cost must be paid as well. Or it could be that the leading player goes back two points on the score track, or at the market wares can be bought at discount prices. Players now must not only consider of which role they would like to take, but also which position they likely want to be visited by the president - and which not. The new laws can be used in conjunction with the old ones, or used as a new set.