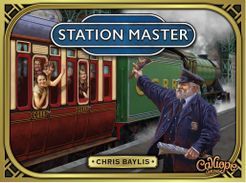 Station Master™ is played over a series of turns until all locomotives have left the station. Each turn, players choose to either attach a railcar to a train or assign a Passenger pawn to a railcar.

Good Morning! Down by the Station, it's going to be a busy travel day. As Station Master, your job is to make sure everything runs smoothly. Your efficiency in assigning the appropriate railcars to locomotives, boarding the trains with passengers, and making sure the trains depart on time will allow you to win the game!