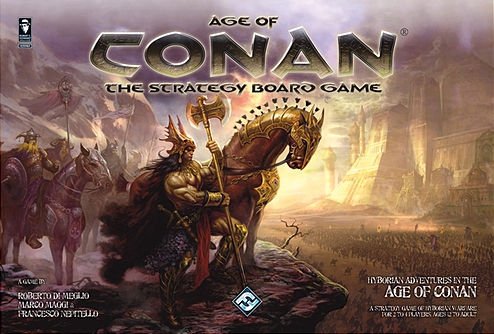 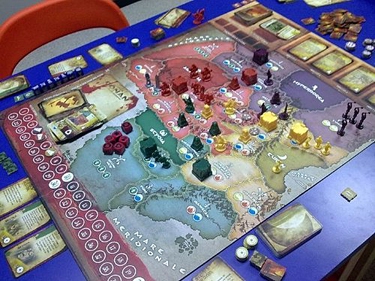 Age of Conan: the Strategy Boardgame

Assume control one of the major kingdoms of the Hyborian age, from the books about Conan the Barbarian by Robert E. Howard. Fight with armies, sorcery and intrigue to make your kingdom the most powerful of its age, and to secure on your side the mightiest hero of all – Conan the Cimmerian!

In Age of Conan, you control one of the major kingdoms of the Hyborian Age – Aquilonia, Turan, Hyperborea and Stygia. You will build up and use your armies and emissaries, you will enhance your actions with your kingdom cards, and you will try to take advantage of the adventures of Conan to increase the power and wealth of your kingdom. The game is played over the course of three ages. At the beginning of each age, four Conan adventure cards are drawn and used to create the adventure deck. At the beginning of each adventure, players will bid to decide who will be the Conan player for that adventure; when an adventure ends, a new one is drawn and a new bid determines who will be the new Conan player. The roll of the fate dice is used to determine the actions available to the players. The dice are rolled to form a common pool from which all players will pick their dice. Each player, in turn, will choose and use one fate die and will be able to do one of the actions allowed by that die result. When the fate dice are all used, they are rolled again and the game continues in this way until all four adventures in the adventure deck are complete. At that point, the game will temporarily stop so that players may earn gold and take several kingdom–building actions in preparation for the next age.

The game is played over three ages, each composed of a variable number of individual player turns, which are based on the roll of the fate dice. The duration of each age is regulated by the adventure cards mechanic: when all four cards in the current adventure deck have been revealed and completed, the age ends, and all players engage in a series of activities (called the age change phase) during which they build up and prepare their kingdoms for the battles and conquests of the next age. A new adventure deck is composed and a new age begins. When three ages have been played completely, or when there is an attempt to crown Conan (during the third age), the game ends.

Victory is achieved by subjugating vassal provinces using military strength, creating alliances using your emissaries, fighting the other players, and by achieving specific objectives which become available throughout the game. You can benefit from the adventures of Conan, by accumulating adventure tokens and, at the end of the game, by trying to make Conan the ruler of your kingdom. The game ends at the end of the third age, or when, during the third age, a player attempts to crown Conan as the ruler of their kingdom. At that point, the players measure their achievements by calculating their final scores and the winner is determined.

Learn more about Age of Conan: the Strategy Boardgame on boardgamegeek.com