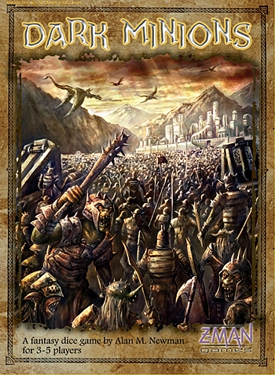 In Dark Minions, the players represent the forces of evil as they try to pillage and destroy towns. Mechanically, 4 different kinds of dice are used to allow a wide range of possible tactics.

"Hordes of dark minions have descended upon the countryside, eager to secure their reputation as a scourge on mankind. The despicable evil marauders attack everywhere in search of conquest. The citizens are helpless and will soon be overwhelmed. Death and destruction awaits all those in the path of the evil ones. In the advanced game, there are also 15 Minion Overlords, each with a unique special power that may affect the play or the outcome of the game. They patiently wait to enter play and wreak their terrible havoc. Using their abilities wisely is one of the many keys to victory."

In Dark Minions players represent the forces of evil as they try to pillage and destroy towns. Thematically, the game is about as dark as any on the market. Mechanically, we use four different kinds of dice to allow a wide range of possible tactics. Also, the Overlord cards tend to create certain powerful combinations and they have the potential to greatly enhance strategies.

On turn, the players typically roll three dice and may use the resulting numbers to attack Towns to win Vanquish Points (VPs). The further along into the game, the more VPs the Towns are worth. Players also attempt to capture Towers in order to level up experience (which enables the player to roll better dice), to re-spawn dead minions from the graveyard and to "purchase" the services of the various Overlords. In the end, it's all about VPs and the first player to 40 VPs in a four player game wins. There is also a modestly longer version with an indeterminate and potential sudden "GAME OVER" end.

Dark Minions also includes a small expansion called Demon Lords, that adds some extra Overlords, a special town tile and a special die - making for some ways to really mix up the game play!