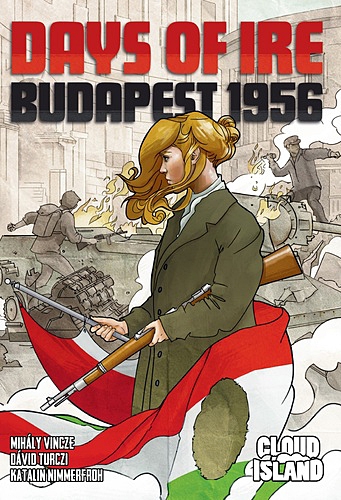 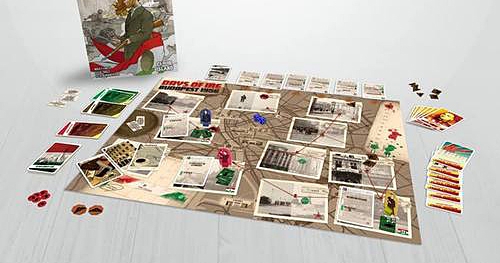 Days of Ire: Budapest 1956 is played over seven days — the last week of October 1956. The Soviet commander plays headline cards at the beginning of every turn, gathering Command Points and triggering effects that sometimes help, sometimes hinder the revolutionary effort.

It's 1956, and waves of protest in Poland are once again showing cracks of the Eastern European communist bloc. Emboldened by these signs, students and intellectuals in Budapest, the Hungarian capital, organize a protest of previously unseen magnitudes. As the communist leadership sweeps in to kill the movement in its tracks a violent response is provoked, thus sparking the Revolution of the 23rd of October.

One player takes charge of the Soviet forces trying to shape the headlines to his liking and uses the militia and snipers of the State Protection Authority to stop the revolutionaries at all cost. The other player(s) (from 1-3 opponents) co-operatively play as the ringleaders of the revolutionary forces collecting resources (represented as icons on their cards) and recruiting other fighters to ensure the revolution's events end up in favor of their side, while fighting off tanks and soldiers in this exciting, historically inspired card driven game.

Days of Ire: Budapest 1956 is played over seven days — the last week of October 1956. The Soviet commander plays headline cards at the beginning of every turn, gathering Command Points and triggering effects that sometimes help, sometimes hinder the revolutionary effort. This card-play, reminiscent of well-known card-driven wargames (CDG) such as Twilight Struggle or Labyrinth: War on Terror, is what drives the tempo and the strategic thrust of the game. The other player(s) form the revolutionary side. They collect cards and fighters for two reasons: to resolve events for boosts to their side, and to fight off militia, snipers, and Soviet tanks in a drastic fight for survival. They have to manage their positions while spreading acrossBudapest, carefully dividing their actions as a team and always keeping an eye on their morale lest they run out of cards. This team-playing aspect — reminiscent of highly successful cooperative games such as Pandemic — guarantees ease of access to players who would otherwise be more intimidated by a traditional CDG.

If any of the revolutionary ringleaders suffer too many wounds, or if they fail to resolve enough events by the end of the game, history changes and the revolution falls. But if they keep the streets ofBudapestfree from oppression, the revolution lives on, to fight another day.

Learn more about Days of Ire: Budapest 1956 on boardgamegeek.com 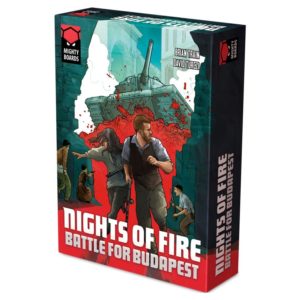 Nights of Fire: Battle for Budapest