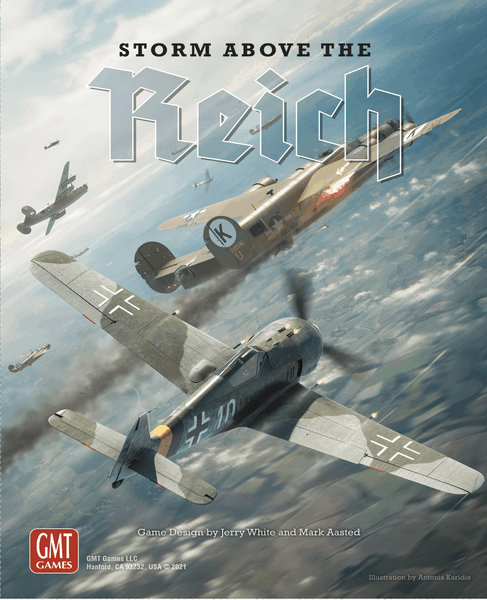 Storm above the Reich

"Storm Above the Reich" is a solitaire wargame depicting a Luftwaffe squadron of Fw190s struggling to deter and destroy the relentless daylight raids over Germany during World War Two.

"Storm Above the Reich" is a solitaire wargame depicting a Luftwaffe squadron of Fw190s struggling to deter and destroy the relentless daylight raids over Germany during World War Two. The player’s individual aircraft, each represented by a stickered block, must confront the mighty “combat box” formation of the United States Army Air Force, a deadly terrain of B-24 Liberator heavy bombers. Like its counterpart, Skies Above the Reich, the game is a broad strokes depiction that presents the arc of the desperate air war. Stretching from late 1942 to early 1945, Storm Above the Reich follows that trajectory in a series of missions strung together to make a campaign. Each mission will take a half hour or more to play, while a campaign can last anywhere between 6 to 60 missions.

Stand-Alone and an Expansion: "Storm Above the Reich" is a stand-alone game; you don’t need "Skies Above the Reich" to play. However, it can also serve as an expansion for that game. Storm uses the same rules as Skies, and components in one game transfer seamlessly to the other. Combined, Storm and Skies present eight formation maps, six pursuit maps, B-17s and B-24s. In Storm, you get an oversized staffel of 18 Fw190s, with the option of augmenting it into a Sturmbocke staffel. In Skies, you get a staffel of Bf109s, and with the games combined, the staffels can also be combined.

Learn more about Storm above the Reich on boardgamegeek.com