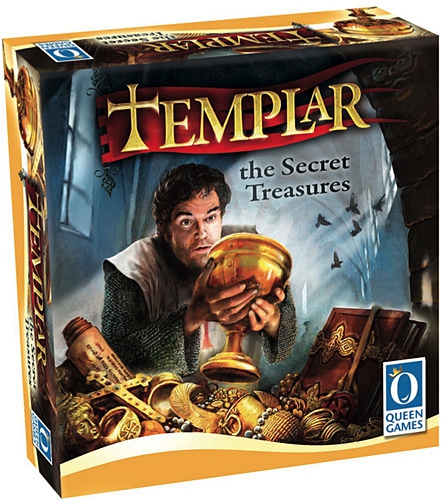 Templar: The Secret Treasures is an exciting family game in which the players help the Knights Templar to get their treasures to a secret abbey and hide them inside.

Templar: The Secret Treasures is an exciting family game in which the players help the Knights Templar to get their treasures to a secret abbey and hide them inside. Each player can use the different members of the abbey to help them hide the treasures – but every character is different and needs to be used wisely. Whoever hides the most treasures wins!

Each player has a hand of ten character cards and a starting supply of treasure: one book, one chalice, and a handful of signet rings, which comes in three types. A harbor with six storehouses is stocked with additional treasures, and three characters – Abbot Remigius, Vitus, and Prior Severus – are placed in the 13-room abbey.

For the first round of the game, each player secretly chooses a character card, then they all reveal them simultaneously, with players then carrying out the actions on those cards in player order. Some characters represent monks who help you move through the abbey and hide treasure, others allow you to take treasure from the harbor, open a locked door while closing off another passage, move treasure that another player has already stashed, among other things. When a player moves Abbot Remigius, the Abbot rewards all players who have stashed treasure in the room in which he ends his movement, with all of the treasure then being marked as scored – other than duplicate signet rings, which can score again should the Abbot return. (Vitus, who isn't controlled by a card, follows the Abbot closely to spy upon him, thus keeping the Abbot from returning to the most recent room he entered.) If the Prior Severus is in a room, though, the Abbot can't do his thing as Severus would then discover the treasure and learn of the Knights' actions.

After the initial round, a player must play a character card that doesn't match the top character card on any player's discard pile – which means that you (and others) play both offense and defense with the same character card, restricting the action of others while ideally make good use of the character yourself. When a player lays down The Bells card, he picks up all of his played cards, then restocks the harbor based on the number of his previously played character card.

When the harbor can no longer be filled properly or when a player has placed at least one treasure in each room, the final round is triggered, then players have a final scoring for their rings still in the abbey and for the number of rooms that hold their treasure. Whoever scores the most points wins!

Learn more about Templar: The Secret Treasures on boardgamegeek.com