Dawn of Technology contains two modules for Trickerion: the Contraptions, and the Signature Tricks.

Dawn of Technology contains two modules for Trickerion: the Contraptions, and the Signature Tricks.

Thanks to Magoria's recent technological achievements, Magicians can now enhance their Workshops with up to four Contraptions, unique to their magic school. Contraptions can be assembled as a Workshop Action, for the cost of 1 Coin per Contraption already in place. They can be used any time during a player's turn by turning them to their inactive side, and receiving a bonus based on the player's Magic school - in the above example, the Mechanical Contraption, the Generator, supplies the city with electricity, netting its owner a steady income of Coins.

Each Contraption has a more powerful effect than the one below it. At the end of a round, each Contraption with enough Shards next to it can be reactivated and used again next turn - this follows the similar principle as the Magician Powers module (which is playable with Contraptions). The highest-level Contraptions are so breathtaking that simply reactivating them will earn you some Fame!

The Contraptions module includes 16 Contraptions with 4 unique illustrations, printed on 3mm blackcore cardboard, and 4 board extensions.

Signature Tricks have the same component requirements as their standard version, but they also require Contraptions to function: the higher their Fame threshold, the more Contraptions you have to use when you prepare them. However, in return, not only do these Tricks have better numbers (higher Yield, more Trick Markers, etc.), but they also have a special power: for example, The Legendary Shark Tank’s Trick markers can be aligned freely in the Theater, meaning that you’ll always be able to create Links with it.

This expansion is contained in the Collector's edition and will also be available by itself, at least from the publisher's website.

Learn more about Trickerion: Dawn of Technology on boardgamegeek.com 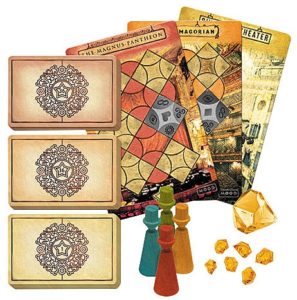 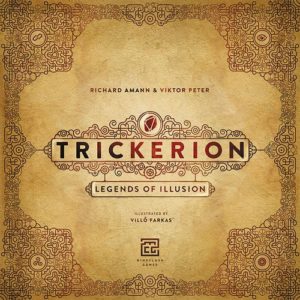 Trickerion: Legends of Illusion BASE 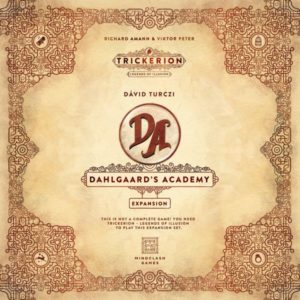